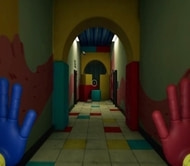 Poppy Playtime is a novelty of October 2021, which has already gained some popularity among players.

This is a horror game with adventure and action elements. It is available on PC in Steam. At the moment only for Windows, but in the future, it may be available on other operating systems. It was developed by MOB Games that are new to the industry.

According to the plot, the main protagonist returns to his former place of work. This building has not been set foot for a long time, and now he wants to find out what happened then many years ago. From the clippings from the newspaper, it is clear that something happened as a result of which many people disappeared.

Now the main protagonist must roam the abandoned toy factory. He has in his arsenal a special device with two long arms, which allows him to reach absolutely any object and reach it. So based on this, interacting with various objects is going to be much easier. Thus, you are also able to reach any button that will be able to open a passage anywhere.

Of course, everything would be much easier if the main protagonist just needed to walk along the corridors of the building. A giant blue anthropomorphic creature also wanders around the location, trying with all its might to get to the player. Therefore, now you need to try, in parallel with the investigation, and run away from it. So, do your best to keep this blue monster from noticing you.

At the moment, only Poppy Playtime Chapter 1 is available in order to play, so players should only expect a sequel. But since the game was released quite recently, it is understandable that the new chapter will not be released at the same time. So, just wait for the next update which is going to shed light on what is happening.