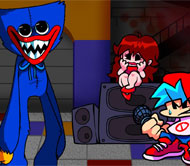 Poppy Playtime FNF Mod could not do without its main rival. A smile does not disappear on his face and he gladly accepts the challenge to take part in a musical confrontation against the boyfriend himself. Play and listen to every note that sounds around the blue plush monster.

The game provides for the presence of perfect ear for music and attentiveness to hit the arrows in time. Poppy Playtime did a great job in Friday Night Funkin ‘vs Huggy Wuggy. He is depicted here as a bright and very cute character. He does not seek to catch or kick you, he wants to play fair and defeat his boyfriend according to the established rules.

Try to keep up with your opponent so that the game doesn’t push you out of the lead on the success track. Huggy is quite agile in music, as well as in pursuit of the inhabitants of Poppy Playtime. He is unstoppable in the middle and heavy fashion of this competition. The first track will seem like flowers to you when the game reaches its climax.

The climax comes on the third track when Huggy starts to taste. He loves to keep up with the music as much as he loves to keep up with his victims at Poppy Playtime. Cool graphics, distinctive music that will appeal to the fans and know-it-alls of the FNF world, the thrill of seeing your opponent – this is what this game is rich in.

If suddenly you feel bored and you feel relieved breathing, it means that the game and the blue genius finally and irrevocably decided to grind you into powder. Help your boyfriend not to lose face in front of the girl of his dreams, who is pretty scared by this monster.